“The Body of an American is an important play about the close friendship developed between two journalists who have observed some of the world’s most recent atrocities,” said Michael Stotts, Managing Director for Hartford Stage. “This play will spark conversations in the community about PTSD and other emotional outcomes of such experiences. We are grateful to Connecticut Humanities for providing a grant that will help support the cost of some of these conversations.” 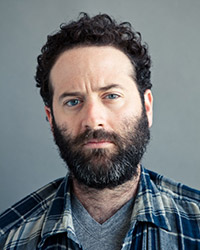 The Connecticut Humanities award will help Hartford Stage in providing four free events coinciding with the run of the play, including: A Conversation with Paul Watson and Dan O’Brien on Monday, January 11 at 7:30 pm; a month-long art exhibit from members of the Veterans Art Foundation; War Talk with Dan O’Brien, playwright of The Body of an American, and Emma Sky, author of The Unraveling: High Hopes and Missed Opportunities in Iraq, at the Mark Twain House and Museum in Hartford on Thursday, January 14; and The Journey Home: A Veteran’s Perspective – a post-show panel discussion following the performance of The Body of an American on Thursday, January 21.

Connecticut Humanities, a nonprofit affiliate of the National Endowment for the Humanities, supports cultural and historic organizations that tell the state’s stories, build community and enrich lives.

The Body of an American runs at Hartford Stage January 7 through January 31, 2016. Tickets for all shows start at $25. For group discounts (10 or more), contact Theresa MacNaughton at 860-520-7114. Hartford Stage also offers a 50% discount on all tickets to active duty and veteran military personnel and their immediate families. To purchase tickets through the Hartford Stage box office, call 860-527-5151.

For additional information on The Body of an American and event programming, visit http://www.hartfordstage.org/body-of-an-american.